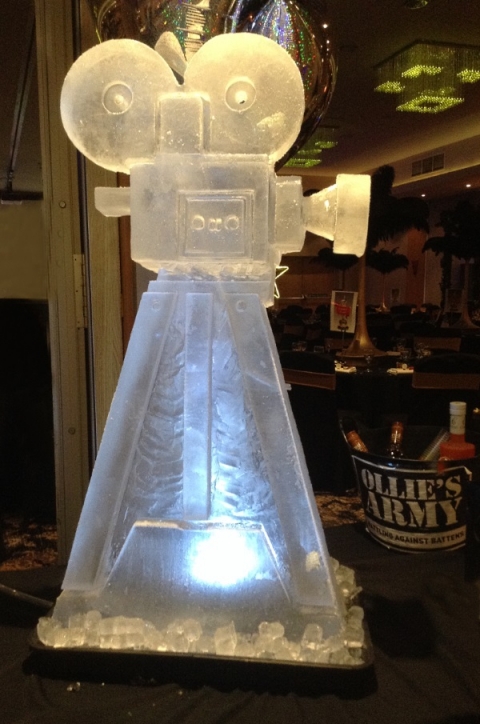 Nikki Ashwell is one amazing woman.  For the past few years she and her team have planned, organized and executed a fund-raising Ball at the Hallmark Airport Hotel in Manchester each year. A phenomenal success raising a lot of well needed cash.

Even though it is a fund-raising event, the value for money, the dedication to give guests a good time as well as giving attendees as much as they can for their paid tickets -  is beyond admirable. Many Charity Fundraisers seem to expect or demand their guests pay a high-ticket price in return for very little.  Not Nikki.

Everything is meticulously thought about and considered; her warmth and putting people at ease has resulted in her team producing great ideas and then making them a reality. Although a serious event, the evening is fun and entertaining.

The Vodka Luge Manchester is for their fund-raising event for Ollie’s Army.  The complete story of Ollie and his sister Amelia can be read at www.olliesarmy.co.uk.  They also have a Facebook page - https://www.facebook.com/olliesarmybattlingagainstbattens/ which is worth reading and sharing. Go there, share and if you can, donate.

Ollie’s Army is named after Ollie; Ollie and his sister Amelia both have Battens disease. It is unfortunately a serious and fatal genetic disease. Patients suffer a progressive neurological impairment to their life which can include: loss of motor skills, the ability to communicate, talk and walk, seizures, personality and behavioural changes, blindness and Dementia. Not all Battens sufferers are afflicted with the same symptoms as the genetic mutations can widely differ from person to person and age.  One thing is known; it is currently fatal and terminal.  It affects both children and adults resulting sadly, in early death.

Nikki contacted us and asked if we could help.  When she explained what Ollie’s Army was all about, its goals and ambitions – how could we say no?

2017’s Ball theme was all about the glitz and glamour of Hollywood. When we arrived, the room was beautifully and opulently decorated with wonderful features such as large Movie paraphernalia (clapper boards, movie cameras), a Cocktail Bar and sumptuously adorned tables.

Our Vodka Luge Manchester brief was to create something that would be in-keeping with the theme, enhance the atmosphere and be fun for the guests to ‘play-with’ during the evening.  With Nikki at the helm, we came up with the idea of a 1920’s -style Movie Camera Vodka Luge.

The Vodka Luge was hand carved from a single ice block – 1m tall and 1/2m wide. Not wishing to sacrifice any of the width, we carved the front lens separately and simply ‘glued’ it to the body of the camera once the Movie Camera was complete. Gluing ice can be a simple or difficult job.  Nothing fancy is used – just plain water to ‘glue’ the two parts together.  The temperature of both pieces is however critical.  Carving the Movie Camera in a minus degree freezer room certainly does help!

We do not use moulds for any of our ice sculptures or Vodka Luges; everything is either hand-carved or CNC carved. The Vodka Luge Manchester Movie Camera started out as a 20-stone rectangular, solid block of ice.  We make our own ice blocks too.  Ice carving is about seeing the finished article in your minds’-eye before you start. James whom carved this piece, knew the dimensions, the structure, the perspective and how he wanted it to look even before he picked up his chain saw.  Several hours later, the finished Movie Camera Vodka Luge was created.

When we set-up the Vodka Luge Manchester Movie Camera, there was a lot of interest in how it was made and what went in to making of such a ‘work-of-Art’. From the reaction of those around us, we knew the Vodka Luge would be part of a very successful evening with lots of guests partaking.

In the USA, it is estimated 2 to 4 of every 100,000 live births are affected. However, research shows it to be a higher figure in Europe; 1 in every 30,000-40,000 in the UK -  even though it is classified as a rare disease. As in Ollie and Amelia, it can strike more than one person in a family as the defective gene can be carried-on.