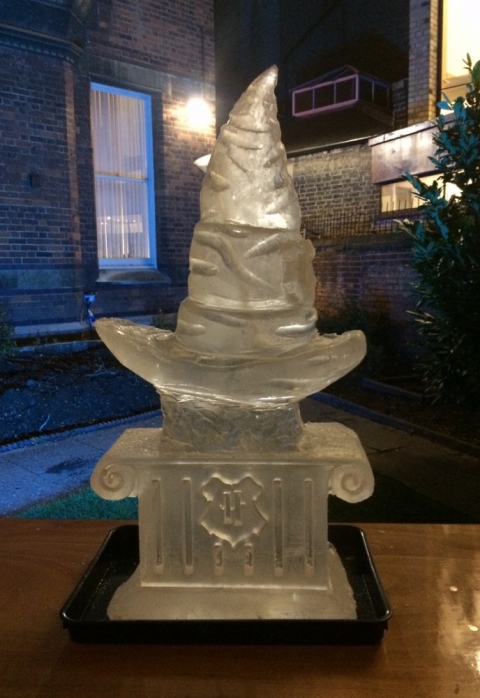 Created for St Catharine's College, Cambridge for their Winter Ball, a Harry Potter themed night. What better than the Sorting hat? 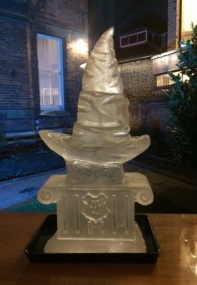 Over the years we have carved and created many Vodka Luge designs for St Catharine's College.

Instead of having The Catharine Wheel (which they have had many, many times from us) the theme to their Ball was based on J K Rowling's Harry Potter books. We put a number of suggestions forward as ideas they could have as their Vodka Luge.  As you can guess, they chose the infamous sorting hat as the design they wanted.

With many images and photographs of the sorting hat we had enough information to create it for them.  Starting with a rectangular ice block measure 1m x 1/2m / 1/4m and weighing in the region of 20-stone, we set about designing and copying the original images. First a 2D sketch onto the front of the ice.

With chain saw in hand we made the initial cuts with lots of ice shards from the ice block flying in all directions in the workshop!  Once the basic shape was taking form, we moved onto carving the sides and back to make it a 3D sculpture.  Using power tools and finally hand tools for the finishing the final sorting hat Vodka Luge emerge.

The hat weighed in the region of 12-13 stone.  We placed the hat onto an ice plinth base to emphasize the hat and be able to carved Harry's 'H' into the front of the plinth.

One of the last jobs - part of the finishing of the sculpture, was to drill a channel through the ice to change it from an ice sculpture to a Vodka Luge. This was quite a chunky, solid sculpture.

We had no problems deciding where to drill.  The entry point was just below the peak (top) of the hat - behind.  The exit point was on the right hand side just above the brim.  This gave a good run of around 40-50cm.

With this Vodka Luge, Ice Shot Glasses are the ideal 'glass' to use.  The ice shot glasses will cool the drink down to create a phenomenal experience. They are also disposable. Drink such as Vodka, Rum, Tequila, Gin, Whisky are ideal to have with this Luge.

If Vodka is to be used, flavoured Vodka is more popular and tends to go-doen better with guests than plain Vodka.  Flavoured vodkas such as Honey Flavoured Vodka will certainly be appreciated and lapped-up!