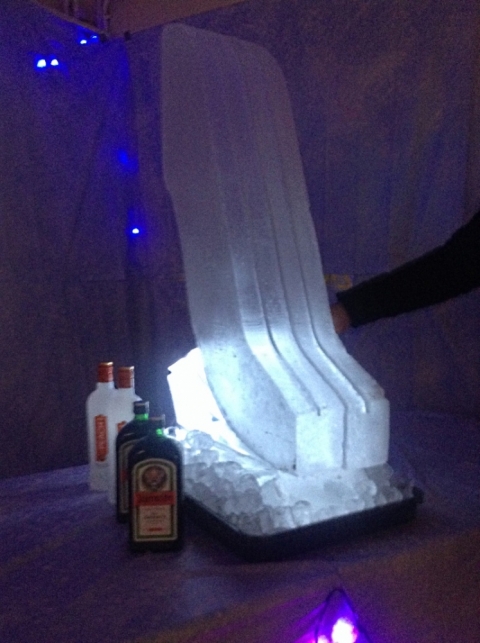 Steve rang us almost at the last minute for the Ski Jump -2. The Knutsford Sports Club were having their annual Ball / Party.  The title or theme was Aprés Ski.  Steve for the past years had used a few London ice companies to carve and deliver their luges.  However,  he had never been entirely happy with the sculpting or the service he had received - hence this year he looked around  for a new supplier.  He rang us.  Being an experienced booker / organizer he knew exactly what he wanted. This came over clear when he asked specific questions and knew the design he wanted; A Ski Jump -2. An Olympic style fast Ski Jump Luge.

An 'Olympic' style Ski Jump has more of a steep angle. 'Conventional' Ski Jumps have a slightly lesser slope angle ratio.  There is not much in it to be fair, but those organizing fun and games to be played with the Ski Jump, every millisecond of the precious Aqua Vita swiftly heading to the athlete's mouth or ice shot glass is valuable time not to be wasted.

We explained to Steve how we did things and what we could do for him. Steve was convinced we could deliver exactly what he wanted. Phew!

On the day at precisely the time we said we would be there,  a Ski Lump was delivered at set-up. He had ice cubes and a bucket ready.  Steve was organized.  One could see the relief on his face when we arrived!   Bottles of drink were already lined-up and the table ready for the Ski Jump Luge.  The Luge  was exactly as he asked for.  So much so,  he was very happy to be filmed giving video testimonial about us.  See below what Steve had to say about us. For their next party/function, he said he would be in touch!