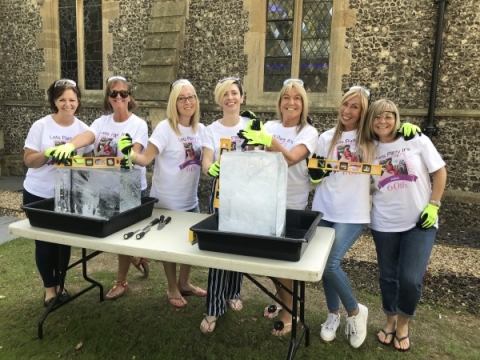 Carving an Ice Sculpture yourself is like nothing you have ever done or experienced before - guaranteed!

Ice Carving Activities are beyond fun and sheer exhilaration!

Julie had been planning her 60th Birthday away weekend for sometime and wanted something very different, something very exciting and something very much a new experience that none of her friends had ever done. After scouring the Internet Julie came across Passion for Ice and Ice Team Build Events.

The concept is startlingly simple and out of the ordinary. Ice carving is a unique activity.  This appealed to Julie; and booked Passion for Ice.

The Background.
Julie and her 7 Ladies had hired a beautiful and hi-tech house for a long weekend of lazing around, some walking in the local countryside, gourmet meals, partying and doing an activity that they had never done before.

Church House Berkshire in the beautiful village of Grazely just south of Reading was the chosen weekend venue. A converted Church; it is pure luxury in every aspect. Julie wanted an activity they all could ‘have a go at’.  Passion for Ice carving Activity fitted the bill and was hired.

On the day of the Ice Carving Activity we turned up at the venue at or around lunchtime. We can run Ice Carving Activities either in-doors or if the weather if fine – outdoors.  At Church House Berkshire the weather was superb. Blue skies and very warm temperatures.  We decided to conduct the session in the garden of the venue.  We set up two tables and all the items the ladies needed – drain trays (two per table), chisels, levels, gloves and so forth.

Divided into 4 teams of two people they were given a choice of ideas of what they could carve – by birthday girl Julie.  Amazingly, they all chose different things to carve.  The timer was set for 1 ½  hours.  As the video shows, they meticulously planned their sculpture (in their heads) – discussing and etching out their design on the ice blocks.  Ice carving calls upon many things:  Logical thinking, progressive thinking (step one, then step two and so forth), 2D into 3D thinking through process.   It needs hand to eye co-ordination; An element of artisticness and then the ability to think, ‘how do I put the idea in my head into reality using a carpenters chisel?’  Mind, body and all the senses.

Initially it is not easy; a rectangular block of ice is the blank canvas sitting in front of each couple, however with some guidance, some short cut methods shown and a ‘have ago attitude’ anything and everything is possible. The ladies soon got the hang and figured out between them ‘what to do’.

The shapes and designs they had in their minds soon took shape.  It is deeply satisfying and enormously rewarding as one sees the design in ones’ minds’ eye coming into reality and emerging from the ice.

The designs they chose were; A Penis, a “60”, a Stiletto Heel and a Heart.

Being enthusiastic is wonderful and is infectious.  The ladies wanted to go one step further than just carving an Ice Sculpture – they wanted to carve a Vodka Luge!  With some help, we outlined the steps and stages they needed to do to make their sculpture into a Vodka Luge.  No power tools were used on on site – just hand chisels.

The Luge had to be what we call a ‘surface Channel Luge’. Similar to a ‘Ski Jump’ Luge.  A fairly deep channel, not to shallow but not too steep had to be worked-out and then executed into the ice.  For a first attempt the ladies were highly successful in creating a Vodka Luge for themselves.

The proof of the pudding was actually using their Sculpture as a Luge.  Julie’s “Penis” Luge was chosen as the preferred testing luge for them all.  I wonder why the ladies chose that one?

Each lady in turn had ‘a go’ at drinking from the Luge.  By the looks on their faces I have a feeling they were going to use that luge quite a bit after we had left!

Creating something with your own hands and then using it is more than deeply satisfying; it is relaxing; it gives a sense of self-achievement.  It is simply an activity like no other.  Don’t take my word for it – watch the video and see for yourself. Ice Carving Activities will have you thinking of changing your career!