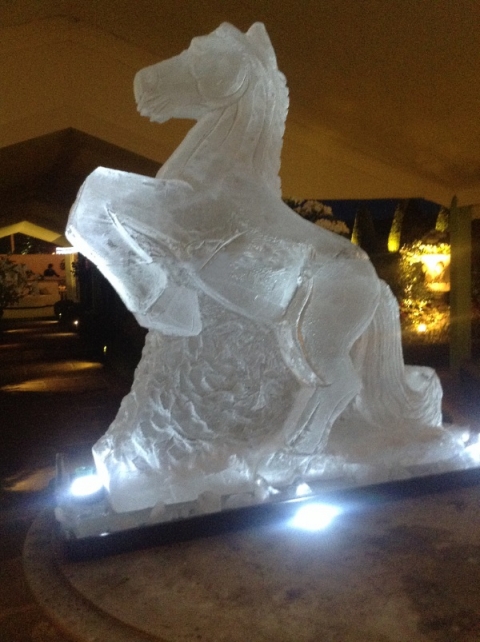 The Horse Rearing Sculpture was and is an incredibly spectacular and very impressive Vodka Luge Ice Sculpture.  The sculpture stood 1m tall and 1m from his head to his tail.  It is a commanding and a major focal point to an event.  This Luge was created for a Wedding for two horse lovers.  What else could they choose for their wedding?

Created from two ice blocks it took a lot of forethought, planning and a lot of drawing followed by meticulous execution - just to make sure the two halves married perfectly and it looked just-right if anything else.

Two rectangular ice blocks were assembled in the walk-in freezer - one ice block on top of the other.  The were placed in a Landscape format (length-ways).  The two blocks measured 1m tall by 1m from left to right assembled.  Although it may not sound very much, this is a LOT of ice and very heavy ice at that.

The first step was to  trace the outline of a Horse Rearing onto very large sets of paper. To use the maximum space or area of the ice, we had to blow up the image that was sent to us by the client. They knew what they wanted and all we had to do was copy it (hmmmm).

Once the basic image was created,  we then traced the outline and shape of the finished Horse rearing sculpture we were after onto the ice blocks.  This was achieved by attaching the papers to the block and then using chainsaws (delicately and softly) drawing (carving) the design through the paper and onto the ice.  Sounds easy, but try it yourself.  It is a lot more difficult than it sounds.   Once we had the design onto the ice, we then set about carving the structure. embellishing and elaborating on the design.

Each block of ice in block form, weighs around 20-stone each.  By the time we had created the basic, first chainsaw design we had gone down to around 35-stone. Removing the paper we then used smaller power tools and hand tools to complete the design.  Several hours later the Rearing Horse Design was carved. The final weight - around 27-30 stone. The last thing to finish off the design was to create and drill a channel through the ice to turn it from an Ice Sculpture to a Vodka Luge.

Once the channel was drilled through the thickest part of the Horse Rearing design, we disassembled the two halves and wrapped them for delivery and transport.

At the venue we had to reassemble the two parts. A VERY sturdy (in fact it was a stone garden table) was selected for the Vodka Luge to be set-up on.  Taking three people, the two halves were assembled.  Liquid glue (water) was used to join and hold the two parts together.  As the sculpture was at or around minus 18 degrees when setting up, we had to work fast and accurately to get it joined correctly and set  - and most importantly marry the two sections together perfectly.

This is a powerful, dramatic and very theatrical piece. Carving Horse Heads are great, but a two-ice block Horse Rearing is something else!