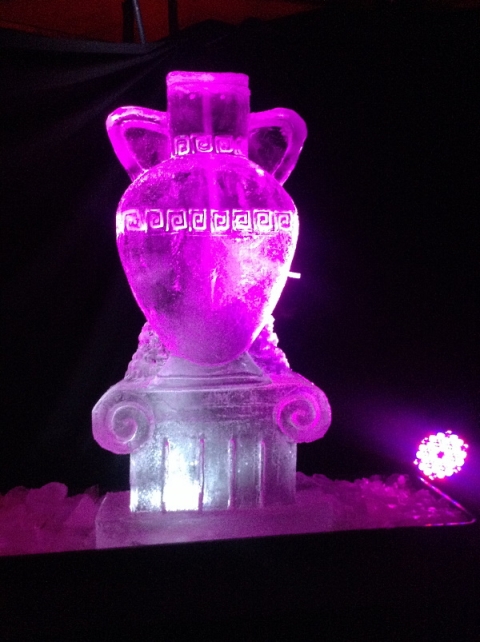 A Greek Urn and its design is almost a national symbol of Greece.  It makes a phenomenal centre piece to any Greek-themed party!

Created for a 50th Birthday party, this Greek Urn Vodka Luge was certainly going to be the centre piece to Janet's party. Placed in a Gazebo right next to the back door of their beautiful country cottage near Oxfords, guests could not miss it as they walked in or out of the cottage.

Vince, Janet's husband had a stroke of genius to light the Luge with a theatrical and dramatic touch; he lit the Greek Urn Vodka Luge with a changing colour LED light.  As you can see from the Video, not only did it create interest but it make the Luge look vibrant and eye-popping. As good as any Vodka Luge is, it is the background and lighting that add that extra sparkle and dramatic interest.  Vince hung a black drape behind the luge.  If that is all he had done, that would have made the Greek Urn Vodka Luge stand out.  By adding the changing LED lights simply added to the ambience and feeling to the Greek-themed party night.

This Greek Urn design was copied from illustrations and wall drawings gleaned from ancient Greece.  Although not a Greek amphora with a pointed base and designed for wine, oil and vinegars, Greek urns were more rounded and had a flat base. Olives, grapes and all manner of produce were stored in these clay vessels.

A Vodka Luge created and carved from a block of pure ice is something special and very different. We love it when clients suggest different ideas to the norm with creative designs and really think about a design that would not only fit-in well with their party theme but literally bring something new, vibrant and make guests say, 'wow, that is brilliant; I love it'.  They are not only complementing us the carvers, but the host for being creative and trying something new and out of the ordinary.  We are bombarded every day with new TV programmes, adverts, shows and Internet sensations that stretch our imagination and mind - with things we have never thought about or things shown to us in a new light. Hopefully a Vodka Luge carving will do the same. Inspire, motivate and get the creative party ideas moving.  But it does take thought and planning.  Luckily we are here to help as well in that department!