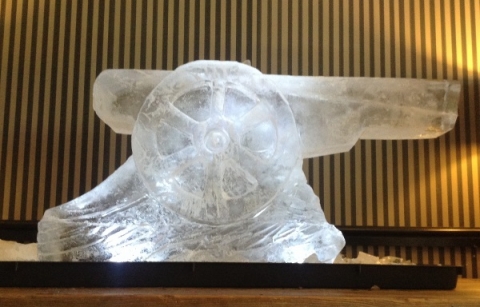 The Arsenal Canon - the logo of the Arsenal Football Club.

This Vodka Luge was created for one of the club's greatest and most fanatical supporter -  for his Wedding.

Less than 10% of all Arsenal Fans have the Arsenal logo or Canon as their Vodka Luge shape at their Wedding.

John could have had ANY design he wanted for his Wedding - Swans, Hearts, Rings, even a Mr and Mrs Vodka Luge.  No, he wanted his second love - The Arsenal Canon.  The symbol of the greatest football club in the world (to John and many millions around the world).

We acknowledge other clubs do exist and may be as good and higher ranking, but John's life and world (apart from his new bride) was Arsenal Football Club.  And thus he had planned for many months (if not years) to have a Vodka Luge in the shape of the Arsenal Canon.

Who could blame him?

Carved from a single ice block. When completed it measured 1m (from left to right) and 1/2m tall - weighing in the region of 12-stone.  It was BIG and impressive - just the thing he wanted for his guests to see and have fun with later in the evening.  Everyone there knew John was an Arsenal fan, but he wanted to make sure they knew!

Guests could not miss seeing the large, vibrant Luge as it was placed in the Reception Hall - guests simply could not fail to see and admire it as they walked in from the sunshine and in to the Main dining hall where the Wedding Breakfast was to take place. He wanted it centre-stage.  And it was!

Placed on a solid table with a very striking wallpaper background; black and gold vertical stripes. The wall paper strangely enhanced the Arsenal Canon Vodka Luge.  The Luge stood-out and was commanding. The stripes were vertical but the luge horizonal in format.  A good and brilliant balance.

We lit the Vodka Luge with very bright LED lighting, which when the frosting had melted would have made the Luge shimmer, shine and look incredible.

We suggested toi John n ot to have Plain Vodka but flavoured vodka drink - such as Vanilla, Raspberry, Lemon and so forth.  Flavoured drinks are more punchy with guests obtaining the real Vodka Luge Experience (as long as the drink is mega-cold or ICE shot Glasses are used.)

As they say, everyone had a good time - at the Wedding and at the Arsenal Canon Vodka Luge in the evening.