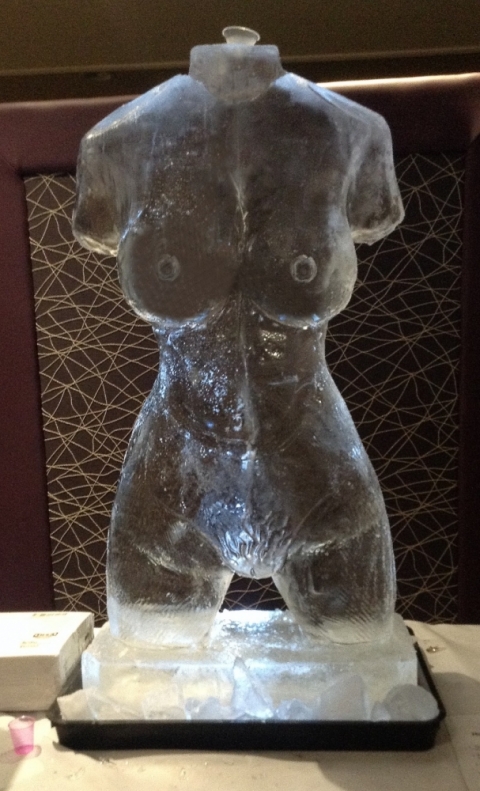 What better to have at a 60th Birthday party with 300 guests than -  not one, but TWO Vodka Luges.  Stephen could have chosen anything as the design for his luges - he chose a "Female Torso" and a "Male Torso". He certainly knows how to party!

The beautiful Willerby Manor Hotel just outside Hull was his chosen venue. The Pavilion Suite tucked to the side of the hotel is a very large room with a capacity of at least 300 - plenty of room for a big dance floor.  Stephen and 'his team' (wife, friends, family)  decorated the entire room with balloons and all maner of party items. When we set up the "Female Torso" Vodka Luge and "Male Torso" Vodka Luge the room was complete and looking spectacular.

One of the most important factors for any Vodka Luge party, is where to place the Luges or Luges. Initially the venue had ear-marked them to be placed on a table literally next to the Photo booth with the gents and ladies toilets behind.  Not ideal for many reasons. Looking around the room, we analysed where the thoroughfares were, where the bars were, the dance floor, stage as well as other considerations.  We suggested the "Female Torso" and "Male Torso" Vodka Luges should to be placed on the opposite side wall to the Photo booth but relatively close to the bar - but not too close.

As guests walked in to the room,  the first thing they would see is the tables beautifully decorated.  The Photo booth would be in front and slightly right of them, then as a coup-de-gras, if they looked to their left, parallel with the stage and DJ would be the two Vodka Luges- the "Female Torso" and "Male Torso" looking spectacular and a real "Wow!" factor. Not tucked away or out of sight but in a position that those that wanted a Vodka Luge experience could have it without being in the way of those wanting to take advantage of the Photo booth.

A Photo Booth, DJ, Band and two Vodka Luges - all the right ingredients for one phenomenal 60th Birthday party!