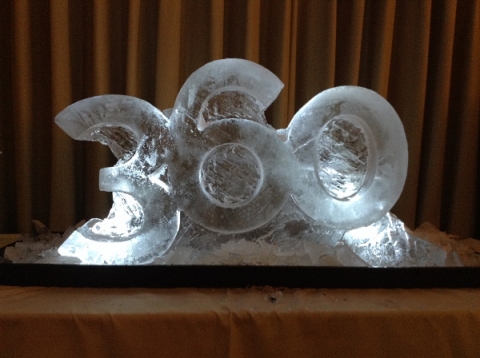 A lot of our business eminate from Corporate business  - of all sizes (from Microsoft to the local supermarket and of course everyone in between). Logos are important to any business, it is their identity and rally-ing flag.  A logo, in our opinion cannot (within reason) be hand-carved.  Some can, but the majority not.  This is where our Ice CNC machines comes in to play.

Upon receiving a hi-res image (it has to be of the highest resolution to obtain good and precise results) we then would plot the logo into our CNC computer.  Depending on the complexity and design of the logo, this can take up to a day to accurately do. It is a very time consuming and needs an awful lot of patience to plot the design.  Once the logo has been plotted, the ice CNC machine takes over.

The cutting blade cuts, grooves and slithers the ice into the form that has been plotted.  Due to programming, the CNC machine does not staert at one end of an ice block and move slowly down to the other end.  It is fascinating watching a CNC machine at work,  It will dart to different positions on the ice block and cut and create the design as it were (or seems) in a random order.  Logically it is not; following a set pattern - the sum of its parts making the whole as it were.

Holly from the company "360" sent us a hi-res image of their logo to be created into a Vodka Luge.  The Vodka Luge was to be a centre or focal point to their Party.

We have created literally hundreds of Corporate logo designs.  Her design was straight forward with a few quirks, but nothing we could not handle.  Once the logo had been plotted,  we were about to hit the 'start' button on the CNC and let it do its thing.

We then had a call from Holly.  The company was transforming and they had a new logo that was about to be launched. It was based on the 'old' name - "360" but was slightly different. We asked Holly to send over the new logo.  She did not have it yet.  Her party was literally about to start in a weeks' time.

Day by day we anxiously waited for the logo to be sent.  As in all good films, the hero saves the day at the 11th-hour.  I am not sure whom the Hero was here, but the 11-th hour came.  The Logo was gripplingly sent almost at the last minute to be in time.  All hands-to-the-pump.  We completed the plotting and carving with a day to spare.

The delivery was on time.  Guests were over-awed by the new logo as they came in.  It certainly was the centre and focal point to the room. Hundreds of selfies with the new logo as well as Instagram, Facebook shots taken...

Not all our clients change their company logo at the last minute - thank goodness.  Being pragmatic and flexible literally saved the day.