Also known as The Combination Shaker it is a three-piece unit.  It consisted of:  the top lid, the collar which contains a strainer and the can which holds the ingredients.

It was developed from The French Shaker which was just a two-part shaker.  The inclusion of a lid, which also doubled up as a measure was created and patented on 24th June 1884 by E.J Hauck whose father (Charles) ran a company in Brooklyn, New York called "Charles J. Hauck & Son," manufacturers of 'Bar Supplies". They invented and created many bar items including  a strainer similar to the Julep strainer.  This one however had a 'bent handle' that fitted over the glass. 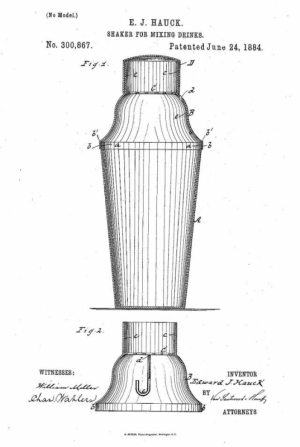