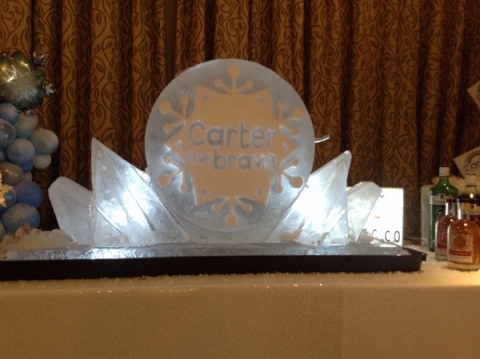 The Charity was set up to help Lucy's son Carter and the Birmingham Children's Hospital Oncology wards and unit. Over the years the Carter The Brave Charity has been in existence, Lucy has raise hundreds of thousands of pounds for the Hospital.  Every penny is vitally needed and every penny raised is put to good use.

At this Charity Ball Lucy asked for their Logo to be recreated in ice - but as a Vodka Luge.  Donations were then asked for on the night when guests 'had a go' at the Luge.  This is a popular and lucrative way of raising funds at any Charity fund raiser.  For guests,  they get to experience a Vodka Luge - we also supplied Ice Shot Glasses - yes, ICE shot Glasses which helped in the overall enjoyment and experience of the Vodka Luge.  Ordinary glass shot glasses could be used, but glass does not drop the temperature of the drink like a glass made from pure ice!   It adds an extra dimension and is novel to most people. Ice Bars and Ice caves (London, Sweden, Denmark and so forth) only serve their drinks in Ice Shot glasses.

The night had a Winter Ball theme and setting.  Tables were laid beautifully; the room was incredibly decorated and in the entranced a Photographer had set up a backdrop to take pictures of guests as they arrived.  The Vodka Luge was strategically placed opposed the Photographer - not a chance of not seeing the Carter The Brave Vodka Luge!

Lucy and her Team at Carter The Brave do a wonderful and worthwhile thing.  They dedicate their time, effort (and money) to helping the Oncology unit at Birmingham Children's Hospital. We think this is phenomenal. We will support The Carter The Brave Charity whenever we are asked to.