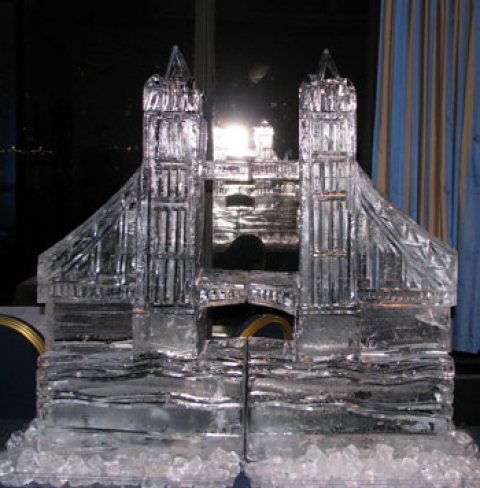 Tower Bridge, crossing the river Thames in London took eight long years to build and construct - from 1884 to 1896.  Spanning some 801 feet (244m) it was opened on the 30th June 1894 by the Prince of Wales (the then future King Edward VII).  An icon landmark in centre London, a Vodka Luge replica never fails to impress guests at any party ('London related').

On the north side of the bridge one leaves the borough of Tower Hamlets and enters on the south of the river into Southwark. Originally it was painted a mid-greenish colour, however to celebrate Queen Elizabeth's silver Jubilee in 1977, the colour was changed to red, white and blue - very patriotic!

Trivia Time -
The original design was made by sir Horace Jones (a London architect), however it was his engineer, sir John Wolfe Barry who actually created and thought of the idea of the two towers. It took 432 workers to realize the plans using 11,000 tons of steel and 70,000 tons of concrete; finally cladding the whole structure in Cornish granite and Portland stone.

The cost?
A massive £1,184,000 was the end bill.  In today's terms that is equivalent to approximately £114 million!  Makes our Luge price look pretty cheap in comparison!