Back to the Future - Revisited 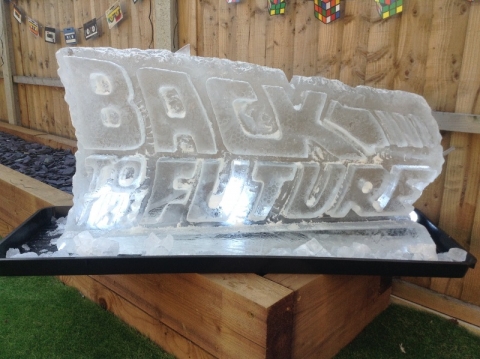 One thing that gets us excited here is a client that wants an ice sculpture or Vodka Luge that we have never carved or attempted before.  As you can imagine we carve a LOT of "Birthday Numbers", Names of people with their birthday number ("Molly 40" and so forth). Nothing wrong with that - we still love it.  However, we do have have a some great clients that return year after year and ask for something unusual and that 'gets us going' - our creative juices flowing.  One such client is Dr Matthew Mills.  He is creative, inventive and to be honest,  a really cool and great guy to talk with, discuss ideas as well as him giving us the freedom to be creative ourselves.

A year or so ago he ordered a two-ice block CNC carving Vodka Luge of the Starship Enterprise. Most of us were brought up on the American TV series of the 1960's; Mr Spock, Zulu, Bones et al.  We KNEW the Enterprise - we saw it every single week zooming at warp speed to some distant destination and (of course into some major) trouble.  Matthew brought us down to earth.  I never knew how many subtle differences and changes there have been made over the years to the USS Enterprise.  The TV Enterprise is not the same as the Film Enterprise (so we found out).  Matthew sent us pictures, drawings and plans (yes Plans) of the Film's USS Enterprise space ship. There is a HUGE legion of fans and very, very knowledgeable people about Star Trek.

We certainly had our work cutout to get this one absolutely right.  Being ice, we cannot put every single nook and cranny detail into the sculpture we would have liked; the Vodka Luge just wouldn't last.  But the bold details certainly would.  The key in any Ice Sculpture or Vodka Luge design is obtain the main characteristics and visual points.  A Vodka Luge is just an ice sculpture with a channel drilled through the ice to be able to pour liquid (preferably alcohol) to obtain what we call The Vodka Luge Experience.  This in itself needs thinking about - thickness of ice, drilling angles and so forth.  The Starship Enterprise was a large two-ice block affair; it was designed, carved and created like a jigsaw puzzle with each part slotting together on site.  James our CNC carver is a near genius at designing this sort of thing.  The Enterprise Vodka Luge was simply stunning.

Back to the Present.
This year Matthew came to us with an idea for his party theme - "Back to the Future".  His initial thoughts were for us to carve a Delorean car - YES!  What a great idea.  It would make a great piece, awesome and very different - imagine dry ice floating and wafting around the car and the whole structure lit with very bright white lighting!   Brilliant.  After much discussion, at one point I threw into the hat another suggestion; we could take the Back to the Future logo, copy it exactly and then CNC carve it - it would be a 100% accurate and a precise rendition. Place it in a very prominent position - so no one could miss it; it would then set the tone for the theme of the party.  Matthew loved this idea.  All other ideas disappeared and "Back to the Future" logo was the one.

It took several hours to plot every part of the "Back to the Future" logo.  James is very thorough and takes great pains to 'get it right'. Plotting this level of detail does take a lot of patience and dedication.  The actual carving took several hours to do followed by hand-finishing. I find it fascinating watching the CNC machine slowly and with great accuracy cut the ice. It doesn't cut the ice as a human carver would; but carves, some would say erratically and not necessarily in what we would call a logical carving order...well, we don't think the same as a machine; so it is logical to the CNC machine to carve that way.  The end result speaks for itself.

On the day of the party (it was a busy day for deliveries). To get a really good image of the Vodka Luge, we should have waited for some of the frosting to have disappeared to get a clear and clean photo.  Unfortunately time was not on our side - we took a photo and obtained a Video Testimonial from Matthew and let him and his guests enjoy the Vodka Luge.

Thank you Matthew, it was a great pleasure carving for you again.  Can't wait to see what the next party's theme is!